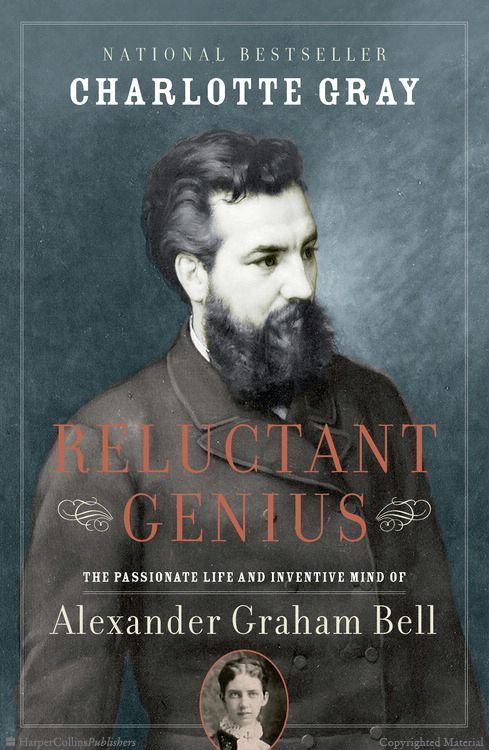 The popular image of Alexander Graham Bell is that of an elderly American patriarch, memorable only for his paunch, his Santa Claus beard, and the invention of the telephone. In this magisterial reassessment based on thorough new research, acclaimed biographer Charlotte Gray reveals Bell’s wide-ranging passion for invention and delves into the private life that supported his genius. The child of a speech therapist and a deaf mother, and possessed of superbly acute hearing, Bell developed an early interest in sound. His understanding of how sound waves might relate to electrical waves enabled him to invent the “talking telegraph” be- fore his rivals, even as he undertook a tempestuous courtship of the woman who would become his wife and mainstay.
In an intensely competitive age, Bell seemed to shun fame and fortune. Yet many of his innovations—electric heating, using light to transmit sound, electronic mail, composting toilets, the artificial lung—were far ahead of their time. His pioneering ideas about sound, flight, genetics, and even the engineering of complex structures such as stadium roofs still resonate today. This is an essential portrait of an American giant whose innovations revolutionized the modern world.
Gray recounts both the inventor of the telephone’s creation of the device and the projects he pursued once his future was secured. Bell is portrayed as imaginative and neurotic, but his marriage to a steadier sort kept him on even keel, if not exactly scientifically disciplined. She was Mabel Hubbard and is so present in Gray’s work as to make it a dual biography. Deaf teenager Mabel met Bell when he taught the hearing-impaired, and Gray’s story of their courtship is intertwined with the story of how Mabel’s father became involved in Bell’s side project of transmitting sound by wire, much in the scientific air in the 1870s. Without the worldly Mr. Hubbard’s legal and business management, Bell might not have succeeded; certainly none of his subsequent inventions had the eclat of the telephone. Combining the household history of the Bells with that of Alexander’s successive enthusiasms (Helen Keller, kites, airplanes, hydrocraft), Gray fairly portrays the attractions and exasperations of Bell’s life. ~ Gilbert Taylor
Ebook4Expert remains free and takes me a lot of time to search for the best books available on the net and share them with you. If you find any value and joy in my work, please consider supporting with a single donation of your choosing, in any amount, between a cup of coffee or a good lunch, via PayPal or bitcoin (which I prefer because it has near-zero transaction fee)
Donate Bitcoins
CLICK TO DOWNLOAD
MIRROR LINK 1
MIRROR LINK 2
MIRROR LINK 3
MIRROR LINK 4