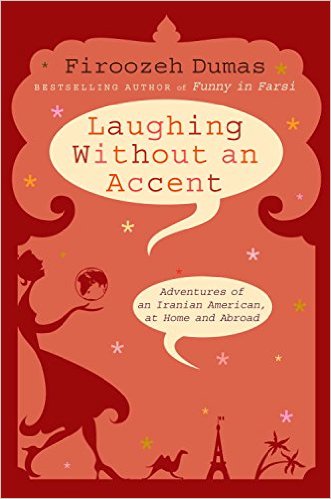 In the New York Times bestselling memoir Funny in Farsi, Firoozeh Dumas recounted her adventures growing up Iranian American in Southern California. Now she again mines her rich Persian heritage inLaughing Without an Accent, sharing stories both tender and humorous on being a citizen of the world, on her well-meaning family, and on amusing cultural conundrums, all told with insights into the universality of the human condition. (Hint: It may have to do with brushing and flossing daily.)
With dry wit and a bold spirit, Dumas puts her own unique mark on the themes of family, community, and tradition. She braves the uncommon palate of her French-born husband and learns the nuances of having her book translated for Persian audiences (the censors edit out all references to ham). And along the way, she reconciles her beloved Iranian customs with her Western ideals.
Explaining crossover cultural food fare, Dumas says, “The weirdest American culinary marriage is yams with melted marshmallows. I don’t know who thought of this Thanksgiving tradition, but I’m guessing a hyperactive, toothless three-year-old.” On Iranian wedding anniversaries: “It just initially seemed odd to celebrate the day that ‘our families decided we should marry even though I had never met you, and frankly, it’s not working out so well.’” On trying to fit in with her American peers: “At the time, my father drove a Buick LeSabre, a fancy French word meaning ‘OPEC thanks you.’”
“There’s such warmth to Dumas’ writing that it invites the reader to pull up a seat at her table and smile right along with her at the quirks of her family and Iranians and Americans in general.”—Booklist
Ebook4Expert remains free and takes me a lot of time to search for the best books available on the net and share them with you. If you find any value and joy in my work, please consider supporting with a single donation of your choosing, in any amount, between a cup of coffee or a good lunch, via paypal or bitcoin (which I prefer because it has near zero transaction fee)
CLICK TO DOWNLOAD
MIRROR LINK 1
MIRROR LINK 2
MIRROR LINK 3
MIRROR LINK 4